none
Wrong Clocks is a puzzle in Professor Layton and the Diabolical Box.

The two clocks in the illustration below both point exactly to noon. One hour later, one clock points to 1:01 and the other points to 12:59. In other words, one clock is fast and the other is slow. Starting at noon, if these two clocks stay fast and slow at a constant ratio to one another, how many hours will it take until they both show the same time again?

The next time the clocks look the same, they won't be pointing at 12:00. Once you realize that, it's just a simple calculation problem.

It will take 360 hours. Once one clock has lost six hours and the other has gained six hours, both clocks will show the same time again. You needed to ask yourself how long it would take a clock deviating by one minute per hour to reach six hours. 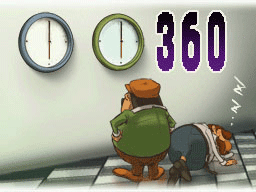 Retrieved from "https://layton.fandom.com/wiki/Puzzle:Wrong_Clocks?oldid=44504"
Community content is available under CC-BY-SA unless otherwise noted.