Sandy Aldwich was a young woman who had a problematic history with men and was a regular at a five-star hotel. On her vacation with her lover, a hotel cleaner found her murdered out at her hotel room's terrace. Her immaculate appearance belied a chequered history with the opposite sex. She was 23 years old.

Aldwich had started dating many men, with their relationships ending due to many reasons, one of which was fortune. One such boyfriend was the bellboy Zach Carrière, who worked at the hotel she regularly went to. They started dating and Carrière started to pay her money to woo her but when Carrière's savings ran out in just one month, Aldwich dumped him in favor of another man.

Aldwich eventually found another rich man named Bosco Felps, a young import-exporter. When they both went on vacation to the five-star hotel Carrière worked at. They both checked in a hotel room and Aldwich gave Felps a hotel card for later access. Later in the afternoon, she called room service for a 'double fish sandwich', with her former boyfriend delivering the sandwich to her out at the terrace. As she signed the receipt to have Felps later pay for the sandwich, Carrière secretly took her boyfriend's tie from the room and took the opportunity to strangle her from behind. Aldwich struggled during the strangling and managed to injure Carrière on his neck. In the process, she got the scent of his aftershave on her hand before she died.

Panicking at the evidence of him being the killer, Carrière quickly covered her hand in pickle juice of the sandwich to cover the aftershave's scent and created a fake dying message to point to Felps's misspelled name as a diversion, as the first initial of each ingredient in the sandwich from top to bottom would spell PHELPS (Pickles, Hand, Eggs, Lettuce, Pineapple and Salmon). Carrière set up the rest of the scene to incriminate Felps and passed by Aldwich's lover when he passed him at the hallway.

Aldwich's dead body was not noticed by Felps due to the blackout curtains covering the window to terrace, but when Felps left a sign on the door handle to have the room cleaned, a hotel cleaner named Vera Wipovsky entered the room using her master key and found her dead body during her cleaning duties. Once Felps was informed of Aldwich's death, he decided to withhold his identity to prevent him from being connected to the murder and giving him bad publicity.

During the investigation conducted by Lucy Baker and Inspector Alfendi Layton, Carrière, who hid his neck wound with an oddly worn neckerchief, tried to mislead the Mystery Room into thinking Felps was the culprit but due to his blunders regarding Felps (the obvious hiding place of the tie and the misspelling of his name in the sandwich), who became more cooperative when informed of Carrière's plot, Carrière was arrested as Aldwich's murderer.

Aldwich orders a sandwich from her hotel room 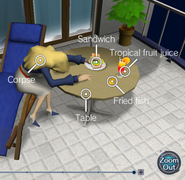 Aldwich's corpse as it appears in the investigation of File No. 001: The Hand Sandwich

Retrieved from "https://layton.fandom.com/wiki/Sandy_Aldwich?oldid=84214"
Community content is available under CC-BY-SA unless otherwise noted.