The Shades are mysterious cloaked characters who appear in Professor Layton vs. Phoenix Wright: Ace Attorney. They live in the Eldwitch Woods outside of Labyrinthia in a small village. They follow the rulings of the "Great Witch", who assigns them individual tasks. They all seem to be very dedicated to their task, being the only thing they talk about (if they talk at all).

The Shades are responsible for creating the illusion of magic in Labyrinthia. Using Invisibility Cloaks, they continuously accompany all witches in the city. Whenever a witch casts a spell, the Shades use their silver bells and machines to create the correct effect. Some Shades have other tasks, such as creating the special ink used for the Storyteller's stories.

A person is inducted into the Shades when they "die", either by being convicted of witchcraft and thrown into the fake fire pit or other nonfatal means that apparently killed them. The brainwashing effect then convinces them they are ghosts in service to the Great Witch, suppressing their personality and free will until they have served a term as a Shade assisting the Labyrinthia Project and Arthur Cantabella.

Once a Shade completes their task, they are allowed back into the city as a new person. In that case, the entire town is brainwashed to prevent anyone from recognizing the person.

All shades wear a purple cloak with various eye-shaped motives on it. They also wear a gas masks that appear to be made out of wood.

A Shade is first encountered by Phoenix Wright and Luke on the market in Labyrinthia. The Shade steals a bell that Phoenix is holding and flees. They go in pursuit, and after a short while, the Shade trips over a rock. The hood falls off and the Shade is revealed to be Kira, who was executed in the first Witch Trial. Phoenix and Luke are shocked, but before they can ask anything, Kira vanishes in thin air.

Various Shades are later encountered in their village by Professor Layton and Maya. It is revealed that all witches that are "executed", as well as their supposed victims, are converted into Shades. They initially try to convert Maya as well, but fail to do so when the professor rescues her. The Great Witch then appears and orders them to no longer pursue Maya. 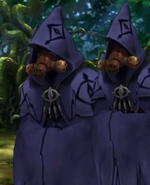 The Shades, as they appear during Professor Layton vs. Phoenix Wright: Ace Attorney
Add a photo to this gallery
Retrieved from "https://layton.fandom.com/wiki/Shades?oldid=76568"
Community content is available under CC-BY-SA unless otherwise noted.