Start a Wiki
The Laytonmobile is a red car owned by Professor Layton, and is his pride and joy. It has an unusually high roof so that Layton can drive it without removing his top hat.

The Laytonmobile sports an unusually high ceiling that lets the professor take to the road without removing his top hat. Thanks to his careful maintenance, the car is always in tip-top shape.

Layton's pride and joy is an ode to classic design made of shiny red metal. He keeps the car in tip-top shape, so it looks great whenever he takes it out to solve a new mystery. Its tall roof affords Layton the headroom he needs to drive with his hat on.

Layton's pride and joy is an ode to classic design, cast in shiny red metal. He keeps the car in tip-top shape, so it looks great whenever he takes it out to solve a new mystery. Its tall roof affords Layton the headroom he needs to drive with his hat on.

Layton's pride and joy has served him well on his puzzle-solving adventures. Its tall roof gives him the headroom he needs to drive with his hat on. This time, Don Paolo borrows the Laytonmobile's design to build a flying machine.

Layton's pride and joy, this little red car has served him well on his mystery-solving adventures. Thanks to Don Paolo, there now exists a model that can fly. Its high roof gives Layton the headroom he needs to drive with his hat on.

Layton's pride and joy. With a beautiful red coat of paint and just enough room for a top hat to fit snugly on its driver's head, it's the perfect automobile for an English gentleman. A few touch-ups here and there from Layton made it as good as new.

Emmy's sunshine-yellow scooter is a poor old thing covered in scuffs and dents from years of reckless driving. It's still a wonderful little machine for getting to and from investigations, though, sadly, it's still no match for Inspector Grosky's nimble legs...

Professor Layton and the Last SpecterEdit

Once he read Clark's letter, Layton set off in the Laytonmobile for Misthallery, accidentally ignoring Emmy in his haste. She chased him through London on her scooter. She eventually made him stop by swerving dangerously in front of the Laytonmobile. After explaining who she was (Layton's new assistant, hired by Dean Delmona), they strapped her scooter to the car's roof and went to Misthallery together.

The Laytonmobile remained parked beside the bridge into Misthallery for the remainder of the game.

Emmy drove Layton and Luke to the Crown Petone to see Layton's old student Janice perform in The Eternal Kingdom opera. She discussed her findings on the myth of Eternal Life with Layton and Luke.

Once she had taken a few pictures of the theatre, she went back to London to investigate the disappearance of a young girl who was believed to be linked with the rumors.

Professor Layton and the Miracle MaskEdit

Layton, Luke and Emmy could be seen packing their suitcases into the Laytonmobile's trunk. They traveled to Montdol on Sharon's request, and stayed there at the Camel Hotel for a few nights whilst solving the mystery.

In the ending, the three can be seen again admiring the view of the city beside the Laytonmobile. They left to go back to London shortly after.

by the professor while he and Luke were on their way to St. Mystere. During the journey, Layton explained the case of the Golden Apple to Luke, giving him the map puzzle to solve.

It is parked on a road just outside St. Mystere beside the drawbridge, and remained there throughout the game. It remained inaccessible as a result of the bridge crank being stolen by Bruno.

It does, however, present a puzzle when clicked on after walking to the exit of the sewers.

At the ending, the bridge crank is returned. Layton and Luke left St. Mystere in the Laytonmobile with Flora, who had decided to join them after refusing to take her father's fortune in order to keep the robotic villagers running forever more. She could be seen sleeping on the back seat.

At the beginning, Layton asked Luke to find his car keys after receiving Dr. Schrader's letter, which were in a drawer in Layton's office at Gressenheller University.

They proceeded to drive through London to Dr. Schrader's flat.

Whilst in the future London at Green Hospital, the elderly Dr. Schrader gave Layton and Luke a set of keys, saying that "the old girl's parked round back". At the rear entrance of the hospital, the two found the Laytonmobile, dilapitated and damaged from being exposed to the weather. Layton failed to start the car, but finds a letter from Future Luke on the passenger seat, telling them to head to the Gilded 7 Casino. They leave the Laytonmobile at the hospital.

It is discovered that the future London is actually fake; being a huge replica hidden in an underground cavern, the clock shop's time machine actually being an elevator. The broken-down Laytonmobile at Green Hospital was actually a replica built to convince Layton that it was ten years into the future.

Meanwhile, Don Paolo had built another replica of the car using stolen blueprints. After tightening the last screw, he allowed Layton to use it to board Clive's fortress rampaging across the future London in an attempt to stop him.

After successfully diverting the fortress's power flow with Celeste's help, the fortress began destroying itself. The elevator had ceased working, halting access to Don Paolo's flying machine (how Celeste managed to board the fortress), so the group rushed to the Laytonmobile.

Layton accidentally drove off the fortress, sending the Laytonmobile with everyone inside crashing to the ground. He quickly remembered that Don had mentioned a failsafe if anything went wrong, and clicked a red switch. The Laytonmobile converted into a plane. Layton took everyone to safety in the real London whilst Celeste went back into the fortress to rescue Clive. He rescued the two just as the fortress fell back into the future London and exploded.

Concept art of the Laytonmobile.

More concept art of the Laytonmobile.

A Citroën 2CV, similar to the Laytonmobile.

The Laytonmobile and Emmy's scooter in the countryside. 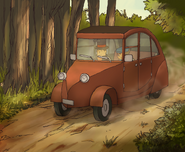 The Laytonmobile doesn't do much else until the third game.

By tapping on it behind Green Hospital, Layton gets the puzzle "The Secret Number". Later on if tapped on again, Luke and the professor get the puzzle "Back and Forth".﻿

Retrieved from "https://layton.fandom.com/wiki/The_Laytonmobile?oldid=91669"
Community content is available under CC-BY-SA unless otherwise noted.