car, and an observation deck that appears at Professor Layton and the Diabolical Box. It is famous for its comfort and luxury, and is often referred to as "a cruise ship on rails". It is owned by Mr. Beluga. It also appears in Professor Layton's London Life.

When Professor Layton and Luke board the train, Flora tails them. The train is on a set route from London but rumors have surfaced that it visits a "phantom town" not found on maps. Whilst exploring the train they are astonished to find that Babette's little boy (dog), Tom is missing and they find Inspector Chelmey on board. Whilst searching for Tom they are told that a young girl (Flora in disguise) has found Tom, so they head to the deck and Flora's disguise is blown away. Luke asks Flora what she is doing here and she says that she didn't want to be all alone again, Layton gets Tom and takes him back to Babette. Later on, after stopping in the village of Dropstone, they get back on the train and head to the deluxe car, and are drugged into sleep by roses put in the cars by Sammy as they pass through a long unlit tunnel. After stopping they discover they have arrived at Folsense Station. Then they get off the train and head into Folsense, where the rest of the adventure passes. At the end of the game, they go back to London.

The player arrives in town on the Molentary Express. The only passengers and employees shown are Hank, Mr. Beluga, and Sammy. Later on in the game, Mr. Beluga holds a ticket game, in which the player helps organize the locations the train is heading to.

Mr. Beluga is the owner of the Molentary Express. He constantly gets angry at his nephew Sammy, who is the conductor, but he is generally friendly to passengers. He is also the owner of the Herzen Museum, and is actually the second son of the late Duke Herzen and the brother of Anton Herzen, although he changed his name.

Samuel "Sammy" Thunder is Mr. Beluga's nephew and the conductor of the Molentary Express. In Folsense, Mr. Beluga (who he sometimes calls "Unko") sends him to find the Elysian Box, and is afterwards supected by Inspector Chelmey's reasoning of killing Dr. Schrader. However, after Professor Layton clears everything up, he is let go and, after deciding that he is sick of his job, is determined to accomplish his dream of being a rock star.

Chester is the train's restaurant waiter. He is found in the dining car for the time Layton and Luke are investigating the Elysian Box on the Molentary Express.

Macaroon is the only chef employed on the Molentary Express. He lets Layton and Luke take care of his hamster, and to try and get him into shape.

Hank is one of the most important people on the Molentary Express. The reason for this is because he is responsible for keeping the train in good repair. He is also part of the team who "repairs" the train's deluxe carriage, ready for its passage to Folsense.

Sally pushes the snacks around for the passengers. She talks to Luke and gives him a puzzle.

The Molentary Express has 7 cars in it. The main engine of the train is inaccessible throughout the game, and the deluxe car (Car 2) is inaccessible until a certain point after Chapter 3.

The first passenger car of the train. This car houses the cabins for some of London's richest citizens including the Train's owner, Mr. Beluga. After Layton, Luke, and Flora sneak in here, they are drugged by flowers Sammy puts out and the train heads for Folsense. It can be inferred that Katia and Inspector Chelmey were also were in this car, as they too can be found at Folsense.

This is the third car of the Molentary Express and it holds the cabin for Professor Layton. Flora's cabin is also in this car, and more specifically, next door to Layton's.

The fourth car of the train is another passenger car and holds the cabin for Capone and Mitzi.

The dining room is where Layton meets Chester and Macaroon, two employees of the train. Inside a small room in this car is the kitchen, where Layton and Luke "adopt" Macaroon's Hamster.

The sixth car of the Molentary Express is another car for the passengers and doesn't have much use in the game, save for Babette's room.

The glorious observation deck in the back car of the Molentary Express possesses a beautiful view of the trees and fields that go by. Here, Layton and Luke confront the girl who had been following them, who turned out to be Flora.

The Molentary Express is owned by railroad tycoon Beluga. It's famous for its luxury, earning it the title of the world's only cruise ship on rails. Just a few passengers know that it also travels a secret second route that takes it to Folsense.

The Molentary Express is owned by Beluga, the railroad tycoon. It's famous for its luxury, earning it the title of the world's only cruise ship on rails. Just a few passengers know that it also has a secret second route that goes to Folsense.

An example of a ticket from the train. This one is leading to Folsense.

The Ticket from the instruction booklet

A cabin in the train. 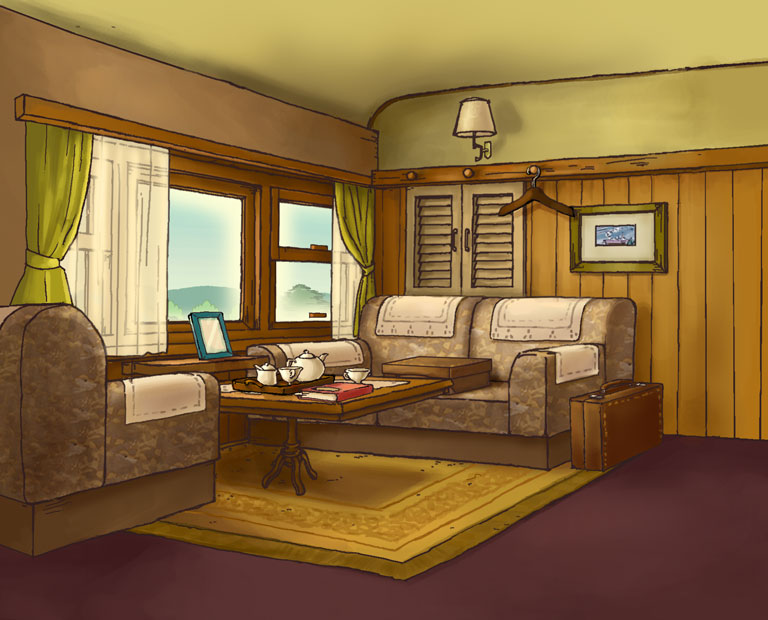 Layton's room on the train.

Layton and Luke leaving the train.

Concept Art of the train.

The train riding in the countryside.

Layton and Luke discussing the train ticket in his cabin.

Luke rushing through the hallway in the third car. 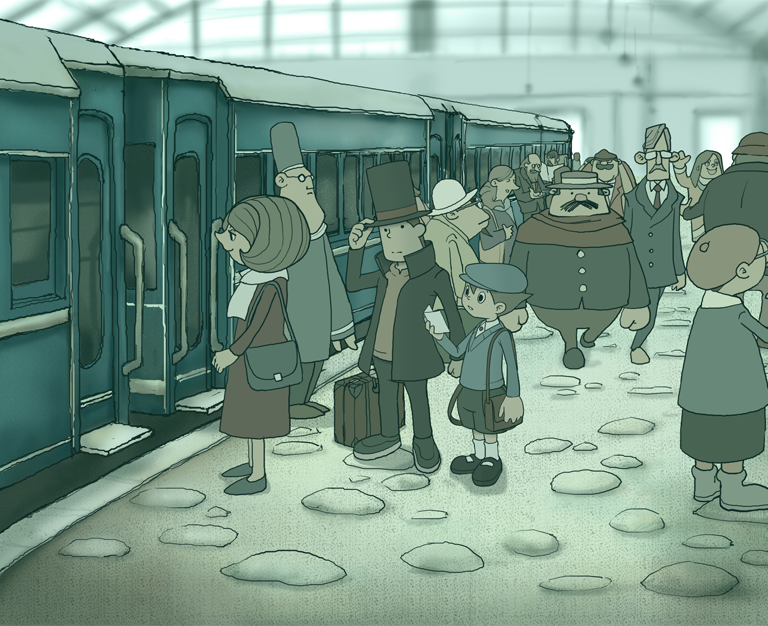 Layton and Luke boarding the train as shown after the Curious Village credits.