The Reunion Inn is a location in Professor Layton and the Miracle Mask. It is owned by Henry Ledore, and is Monte d'Or's largest hotel.

The hotel started off as a small inn by an oasis 18 years before Miracle Mask. It was built as a place for Randall Ascot's search party to stay while searching the Akbadain ruins for him under Henry's guidance.

Whilst looking for Randall, the search party found the treasure of the ruins, making Henry a millionaire. The inn began expanding, and people who were also searching for Randall to claim the huge reward began building their houses by the oasis. This was the beginning of Monte d'Or.

Professor Layton and the Miracle Mask[]

Starting to unravel the mystery, Professor Layton decided to go here with Luke and Emmy in order to find the Masked Gentleman.

They were welcomed by the hotel's manager, Mordaunt, who invited them to see Henry's study. Whilst Luke and Emmy looked around (finding a photo of Henry and Randall as children, a toy robot, and a notebook entitled 'The Special Investigation Team Explorations'), Layton talked with Mordaunt in another room.

Once finished, the group went back to the hotel's lobby, where Mordaunt gave them a story book. It told of five friends who found treasure, one of them buried it so they relieve the experience, but it seemed incomplete as it just ended with a location. When they finish reading it, all of the lights in the hotel suddenly went out, and the story ending actually hinted at the location of another book. The three searched the hotel, the lights coming back on, and found the next story of a man who got betrayed by a dog he saved, with this one hinting at the next's location in one of the hotel suites. The third was hidden in the hotel gardens, it was about a poor man who took advantage of and forgot all about the people who were generous to him, it lead to one last book being in the main hall.

The last book told a story about a king, a princess, and the king's 'loyal' minister. The king left one day to kill the dragon terrorizing the kingdom, and in his long absence, the minister took over the kingdom. At the end of the story, there is another hint for the three to go to the hotel's cinema. The ending of the story plays on the screen; the king finally returned one day to find his minister had taken over and had married the princess, whom the king loved.

The lights suddenly went out completely after the three finished reading, and when they turned back on, Layton and Emmy found that the Masked Gentleman had kidnapped Luke, trapping him in a rope complex high up in the hotel's main hall. The Gentleman asked Layton if this time he was able to save his friend's

life, and watched from the first floor as Layton and Emmy figured out how to save Luke.

Solving a puzzle, Layton climbed down the ropes using a candelabra and rescues Luke. Emmy joined them on the first floor via the stairs. Layton told the Gentleman that he knew who he was, so the Gentleman took off the mask, and was revealed to be Randall.

Randall explained that he had survived the fall with amnesia; he was found

by an old man, Firth, who took him in, and he had lived with him for the last 18 years, working as a farmer. Some time before Miracle Mask, he had received a letter from Jean Descole, telling him that Henry had stolen his research into the Akbadain ruins and used it to make himself rich, then married Angela. Enraged, he accepted Descole's help, and became the Masked Gentleman in order to get revenge on Henry.

Randall then ran off. Layton and co. ran outside to find him on the roof of the hotel. Randall briefly said that the 'last miracle' he mentioned at his final act of revenge. The cliffs that surrounded Monte d'Or began collapsing, pouring in sand from the surrounding desert, which started to flood the city. Randall then threw the mask on the floor and escaped with the panicking residents, leaving the group to find a way of saving the city from being destroyed. 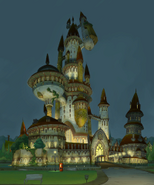 The inn at night. 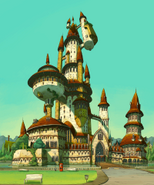 The inn at day