Zach Carrière was a bellboy who was involved with the murder of Sandy Aldwich. He was one of the three suspects of the case and was somewhat of a narcissist who wore very strong aftershave. He is a clean-freak and an efficient and diligent worker. He is 19 years old. His name and choice of words dictate to us that he is French. 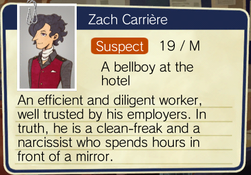 Carrière was a bellboy working at a five-star hotel and had started dating Sandy Aldwich. He proceeded to pay her money but when his savings ran out in just one month, Aldwich dumped him for another man.

When Aldwich came to the hotel again with her lover Bosco Felps, Carrière was asked to bring a 'double fish sandwich' to her as part of room service. At her request, he brought the sandwich out at the room's terrace. Unbeknownst to her, Carrière took Felps's tie from the room and planned to kill her. When Carrière strangled her with the tie from behind, he was wounded in the neck during the struggle. Aldwich's hand had obtained his aftershave's scent so Carrière had to disguise the scent with pickle juice in her sandwich. Since he knew the hand in the sandwich would be too suspicious, he had to create a fake dying message that showed Felps's name, which he thought was spelled "Phelps". He arranged the rest of the crime scene and left the room, passing by the man he framed for murder.

During the investigation of Aldwich's murder, Carrière, who hid his neck wound with a neckerchief, attempted to mislead the investigators by giving misinformed information about Felps. His mistakes ultimately led to his undoing and his scheme was exposed during the interrogation. Carrière admitted he killed her but blamed Aldwich for driving him to murder.

Afterwards, he was convicted of murder and placed in a prison cell. He later chatted with Mike de Bonair about the methods used to escape prison while a patrolling guard walked by.

Retrieved from "https://layton.fandom.com/wiki/Zach_Carri%C3%A8re?oldid=67433"
Community content is available under CC-BY-SA unless otherwise noted.